Acid dyes which are anionic, water soluble and normally applied from acidic bath. Acid dyes are applied to the fibre under acid conditions. Acid dyes have very good shade range and standard fastness properties. Wet fastness of acid dyes can be improved after-treating the dyeing in some cases. Compatibility within combination is important as blocking effects and differential coverage of yarn irregularities may result if selection is not carefully done. Acid dyes fix to the fibre by hydrogen bonding, vander waals forces and ionic linkages. There are 3 kinds of acid dyes such as neutral acid dyes, weak acid dyes, strong acid dyes.

Use of Acid Dyes:

That is to say wool polymer has amino group of one side and carboxylic group on the other side. In certain condition it became:
H2N - W - COOH → H3N+ - W - COO-

When wool is immersed in acid solution the concentration of acid reduces and the absorption of acid by wool fibre increases. This absorption continues until equilibrium absorption. 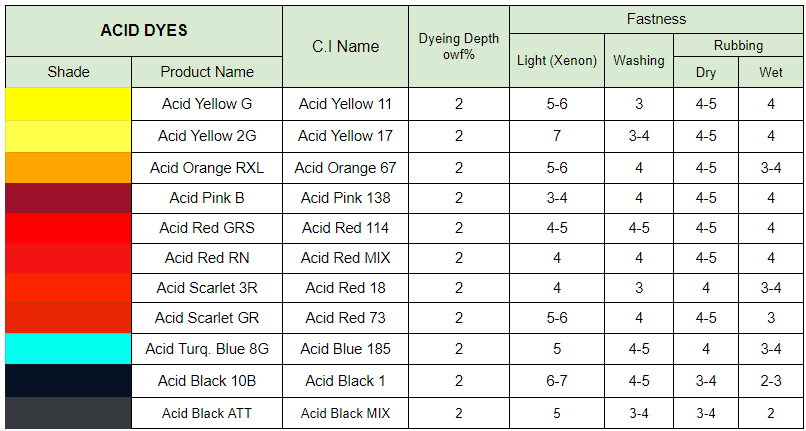